I've always been intrigued with what the uniforms of teams looked like. With the older photos being black and white, one has to guess. Fortunately sometimes the newspapers gives us a peek by description. I've combed through them and transcribed the relevant info. 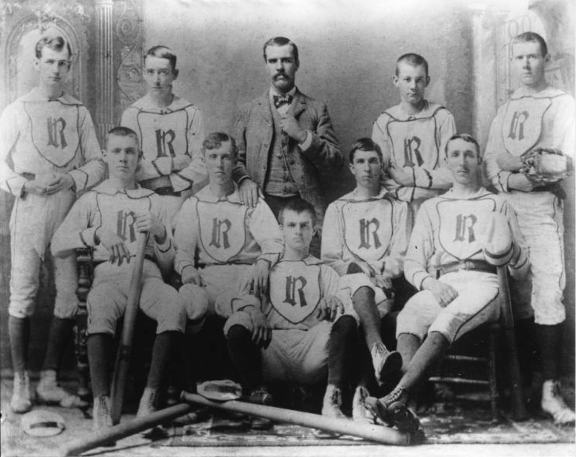 Knoxville Uniforms through the years

The Holston boys had their field flag with them, which they planted by the tent. It is a red flag, with the letter "H" in a blue field. Their uniform was blue cap with white star, blue pants with white cord, white shirt and red belt. Their gentlemanly bearing and fine appearance made them favorites at once.

The "Nan Alice" base ball club have lately received nine uniform caps and small belts, from New York at a cost of $15. They are very neat.

As soon as the new club is fairly organized their suits will be brought on to this city. Mr. Nathan Lieber, one of the most progressive young business men in this section, has taken this nine in charge, and is going to give them a full and complete outfit of costumerie. Their caps will be solid red, and the suits of gray, will be trimmed with red. The nine will wear red stockings.

The Leiber nine presented a very nobby appearance in their natty suits of dark gray, trimmed in red, with red stockings and red caps.

Jackson Smith, one of the directors, who has for some time been on an eastern trip, ordered sent to Knoxville a number of samples from the well known establishment of Keefe & Bucannon.

The board of directors have decided upon the new uniforms, and they will be very neat and beautiful ones.

The shirt and pants will be made of light gray material. Upon the breast of the shirt will be the letters, "K.R.," standing for Knoxville Reds.

The cap will be of the same material as the suit and will be trimmed in red.

The belt will be red and the stockings black. Regulation ball shoes will also be furnished.

The suits will be made as soon as possible, so that they will be ready for the opening game, at whatever time it may be played.

The new uniforms for the Reds are on hand. Made by Keefe & Becannon, they are uniforms for brotherhood men, men who will stand together and on a square basis, and fight out manfully the contests of the diamond. Let us have no petty strifes, but a team playing for a team's interest solely.

The young men of South Knoxville have organized a new baseball team. It is composed of experienced players and promises to be one of the best teams about Knoxville. They have ordered their uniforms which will be dark blue trimmed with red and white. The team has not decided on any definite name yet.

The local club stands seriously in need of new uniforms, and a good offer has been received from Chattanooga, which has offered the gray suits of the old league team at a low figure. In all probability the offer will be accepted, as the suits are as good as new.

The new uniforms to be worn by the Reds this season are beauties. They cost just $15 apiece.

The new uniforms are beauties, but with them the term "Knoxville Reds" must die. The suits are solid grey with KNOXVILLE in black letters across the breast. The caps and stockings are also jet black.

The uniforms for the team will arrive from Cincinnati to-day. The uniforms will be of a maroon color, with the white lettering on the breast of the shirts. The caps will be red with a white stripe, stockings red.

The new uniforms for the "Indians" arrived yesterday and they are beauties. They are by far the most handsome uniforms ever donned by a Knoxville team and the boys show up great shape. They are "broke in" yesterday afternoon and the large crowd present at the practice game were delighted with the new "rigs."

The uniform of the Indians will be the same as last year, with the exception of different trimmings.

The new uniforms, of gray and maroon trimmings, will reach the city tomorrow morning and will be worn by the team when the members go on the diamond.

Transportation has been sent to all the players and new uniforms have been ordered for use this season. The uniforms are of Yale grey; Boston caps of maroon, and maroon stockings will complete the outfit.

A symphony in white will be the Pioneers when they appear before the fans Wednesday afternoon. The new uniforms arrived today and if the performers don't slide too often, they will be the classiest in the league. The cap, shirts, pants and stockings are pure white, and of the finest material. On the cap is a small "k,: and on the shirt on the left side, is a large "K." The uniforms are a credit to the team, and the Pioneers will have a chance to discard those unlucky Charleston togs.

Before the game, the Knoxville and Asheville teams in all of the glory of their new uniforms will parade down Gay street before taking cars for the park. Those new white and maroon suits of the locals have arrived, and they are the real "glad rags" in the way of base-ball suits.

Uniforms for the members of the Knoxville baseball team were ordered Wednesday morning by Manager Frank Moffett, and there is little doubt but that the local ball tossers in addition to being the best players in the league, or at least that is the way the Knoxville fans have it doped out, will be the best "dressers," for their baseball togs will be something real nifty.

In fact, the uniforms will be just about the best that money can buy, being of a higher grade even that those worn by the members of the National and American league teams. The suits will be white, very much like those of last year. Maroon stockings will be worn, while the caps will have a maroon stripe and "Knoxville" will be emblazoned on the jerseys in maroon letters.

The Knoxvillians were diked out in their new uniforms yesterday, and they are very classy, to say the least. They are of solid white, and the texture is excellent. Maroon stockings and white caps complete the fighting costume of the Knoxville players, who are expected to go out after the pennant and bring it home, just as they did last year in the Southeastern.

The new uniforms are here. They are white, trimmed in maroon.

Uniforms have been ordered. These will be white with a broad brown stripe and the K on the shirt. The new uniforms will be used for home suits and the Pioneers garbs of last year will be carried on the trips.

The Pioneers will have two sets of uniforms this season.

This announcement made Saturday night by Managers Frank Moffett, will come as a welcome surprise to the many fans who never could understand last year why clubs in less fortunate financial circumstances furnished their players with separate uniforms for road and home service, while the Knoxville players wore the same begrimed outfits day after day.

In fact, the uniforms have already been purchased. While at home the Pioneers will disport themselves in white, with gray the color worn on the road.

The new uniforms for the club have been received by the Athletic House. The home suits are white, with a black stripe and a red K; the stockings are red and white. The same colors are used in the stocking for the road toggery, but the suits are gray, with Knoxville in red letters across the breast. On the left sleeve is 114% in red.

They are now on display in the show windows at W.W. Woodruff Hardware Co., 424 S. Gay st, thru which they were purchased.

The home uniforms for Manager Coleman's boys are white with black stripes, and are trimmed in navy blue.

To say the least they are snappy looking.

But the road uniforms are even better looking.

They are reddish gray in color and are trimmed in bright red.

The road socks are red, white and blue, while the home socks are white with navy stripes.

The road caps are made of the same reddish-gray material as the uniforms, and are trimmed in bright red.

The home caps are white with the navy stripe, and are trimmed in blue.

University of Tennessee Uniforms through the years

The new uniforms for the University baseball team are being made. The uniforms are to be of a dark grey cloth, with red trimmings, cap of the same and red stockings.

The contract for the suits was let yesterday to Leiber Bros., and the order is for the very best that can be made.

The uniforms from last season are as good as new but most of the caps are gone. These will be replaced and it is probable that sweaters in the college colors, orange and white, will be furnished for members of the 'varsity team.

The new uniforms for the University of Tennessee baseball players have arrived, and present indications are that the Volunteers will have just about the classiest "glad rags" ever worn by any bunch of balltossers in this section.

Of excellent material, the suits are Yale gray in color, and handsomely trimmed. Down the front of the shirt "Tenn." appears in orange-colored letters, while a large "T" enclosed in a diamond is placed on each sleeve. Gray caps will also be worn, and these like the trousers will have orange piping. White stockings with two orange stripes will add to the color scheme.

Maryville College Uniforms through the years

The new base ball suits have come and may be seen on the field every day. They are garnet in color and are the best and most elegant suits ever worn on College Hill.