The Class D 1910 West Virginia League was comprised of four teams, Clarksburg, Fairmont, Grafton, and Mannington, all located in North-Central West Virginia. Grafton and Fairmont were part of the 1909 Pennsylvania-West Virginia League. The league started play on May 3, 1910 and concluded on July 5, when the Grafton club withdrew. 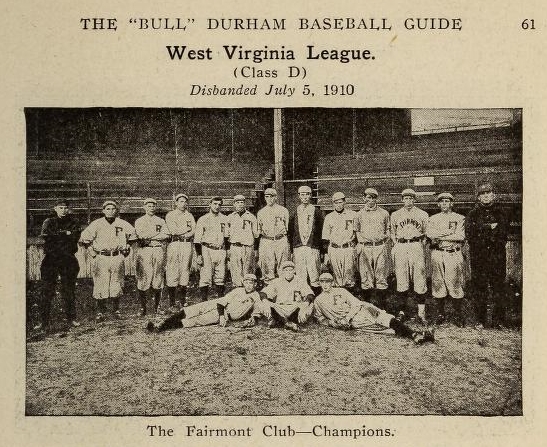 Notes on statistics: None of the published guides gave individual statistics. These were transcribed from the July 2, 1910 edition of The Fairmont West Virginian. These are the "Official Tables Up to and Including June 30th Issued by President Raymond on Friday." Pitcher William Ryan appeared in at least one box score after that date.

The "Bull" Durham Baseball Guide had end of season standings that were off by a great deal. The Sporting Life was consulted for more accurate standings. Player names were taken from newspaper box scores and statistical standings. See the Key page for abbreviations and glossary used on this page.